Laying of the Foundation Stone of the new ARDEX Campus 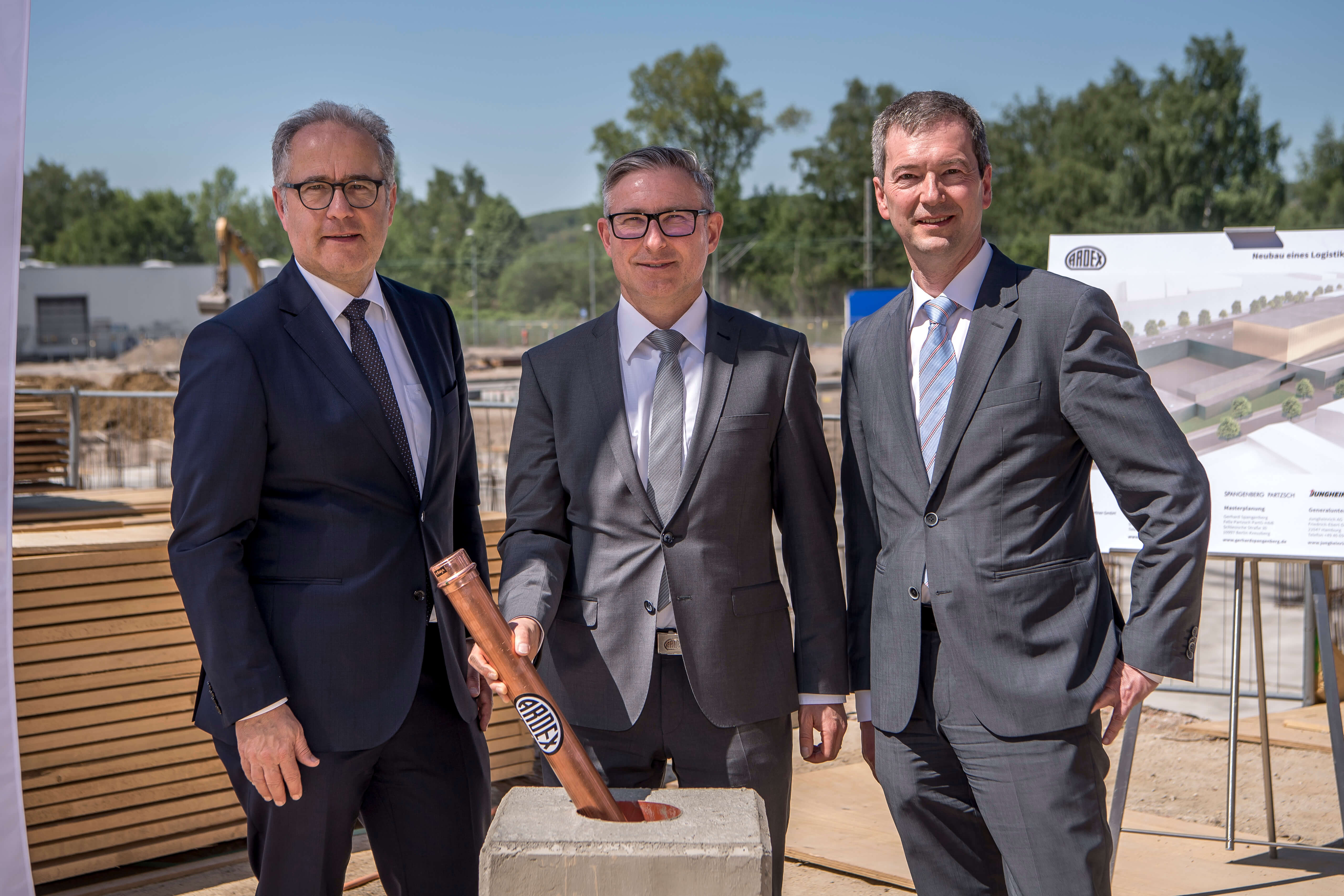 With the laying of the foundation stone for the new logistics center, ARDEX officially launched the large-scale infrastructure project “ARDEX-Campus” on Monday. The construction chemicals specialist is continuing its innovation offensive at the Witten location – thereby signaling the entire Ruhr area. “The construction works are a prerequisite for us to continue to grow and create additional jobs,” said Mark Eslamlooy, CEO of the ARDEX Group.

The first step has been taken: On the former STAMA site next to the existing ARDEX logistics, construction began in March – after Ardex has taken all legal and political hurdles for the construction project around the founding mansion. An effective logistics center with fully automated high-bay warehouse and modernized shipping will be built on the approximately 20,000 square meter site. This is accompanied by the optimization of arrival and departure routes. This means less traffic on the Friedrich-Ebert-Straße and ultimately less emissions and noise. “It was important to us that the residents were relieved of the burden over the long term, and we wanted to keep the burden of the construction measures as low as possible,” says Mark Eslamlooy.

Especially the construction of new logistics is an important step for the international family business to continue the growth path in the future. “We have already invested heavily in the site over the past few years, for example with the new training center and research and development center, but with increasing international growth, increased variety of items and the digitization of many business processes, our performance requirements have continued to grow We take development into account with the entire infrastructure project and prepare ourselves for the future, “says Mark Eslamlooy.

The new logistics building is part of the infrastructure project “ARDEX-Campus”. The focal point will be the new, 24-storey administration tower, which replaces the former administration building from the 1960s. It should be ready for occupation in 2022 and have an area of ​​10,000 square meters – and thus provide space for up to 100 new jobs. In addition, the production is extensively modernized, in line with the “factory of the future”.

When planning the Ardex campus, the family-owned company attached great importance to an overall concept for the factory premises and an improvement in working conditions in all areas. These include the modernization of the entire Ardex site at Friedrich-Ebert-Straße and the integration of the existing buildings into the new campus. All buildings – including logistics and production – are harmoniously coordinated.

In order to report transparently and up-to-date on the construction progress of the ARDEX campus, a special website, www.ardex-campus.de, has been set up. All interested parties will find exciting details about the overall concept as well as pictures and reports here.

With the ARDEX Campus, the role of the Witten location as a “heart” of the international ARDEX Group will be further expanded. “Many areas work internationally from here and are responsible for the branches in Germany and abroad, including production, research and development, controlling, strategy and IT,” says Mark Eslamlooy.